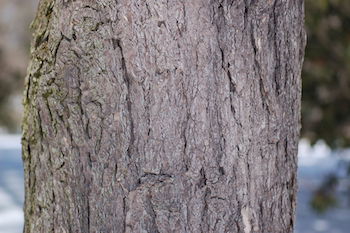 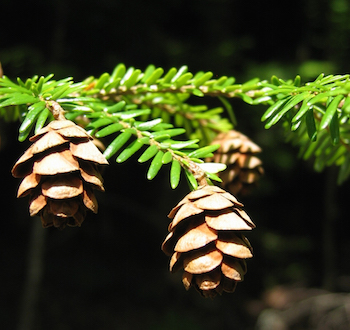 Eastern hemlock, also known as Canadian hemlock, is a late successional, slow-growing and long-lived native conifer. It is most often found on moist or rocky ridges, as well as north-facing slopes and valleys.  Eastern hemlock has furrowed and ridged brown bark, pendulous and drooping branches, and a nodding top.  Leaves are linear and tapered with slightly grooved surfaces above and distinct midribs and faint stomatal rows below. They are spirally arranged on branches, but often twisted at the petioles.  Eastern hemlock is monoecious with small ellipsoidal and pendant female cones (1-2 cm) and male pollen cones, both borne on 2nd year branchlets. They are wind-pollinated and gravity and wind dispersed. 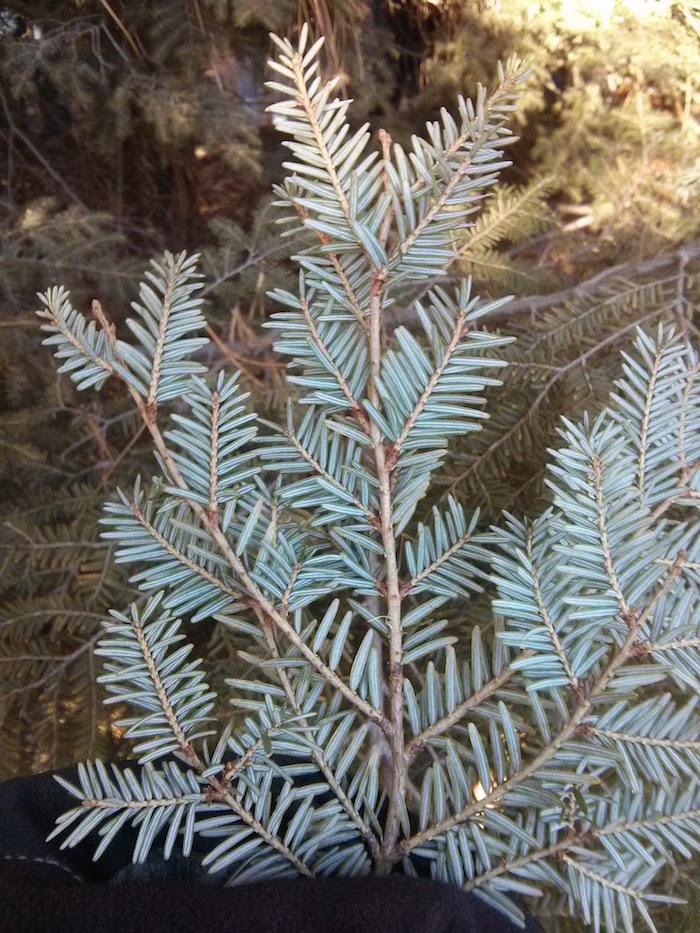 Historically Eastern hemlock was used as a source of tannins in the tanning industry, and as a timber species used to make telephone poles, railroad cars and ties, and paper.  Its use as an ornamental plant began in the 1850s and now over 270 cultivars of weeping, dwarf, and variegated varieties exist. Eastern hemlock is currently considered endangered in Minnesota.  Although always existing in disjunct populations, the number of mature trees alive in Minnesota has decreased from over 1, 000 trees in the early 1900s to less than 50 mature trees and scattered saplings and seedlings of known native origin as of 2008. In Minnesota, Eastern hemlock is found growing with yellow birch (Betula alleghaniensis), eastern white cedar (Thuja occidentalis), white pine (Pinus strobus), and white spruce (Picea glauca) on moist, well drained soils in cool, sheltered north-facing slopes.

The University of Minnesota has been involved in research on Eastern hemlock since the 1970s when Margaret B. Davis studied quaternary palynological history of the Great Lakes. Lee Frehlich in the Department of Forest Resources also studies the long-term dynamics of old-growth maple and hemlock forests in Upper Michigan. Current research at the University of Minnesota focuses on the restoration potential and genetic diversity of disjunct populations and cultivated trees.

Eastern hemlock is extremely susceptible to an invasive insect, the Hemlock Wooly Adelgid (Aldelges tsugae, HWA), which was introduced to the United States from Asia in the 1920s. Since it’s introduction to the North American landscape, it has devastated forests in the mid-atlantic region and is continuing to spread to other northeastern states. It is estimated that by 2025, it will have reached Lake Erie and Lake Ontario. In addition to HWA, eastern hemlock is susceptible to needle blight, rusts, root rot, cankers, sawfly, spider mites, and deer browse and other herbivory.