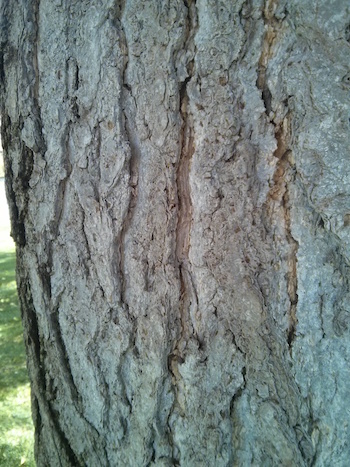 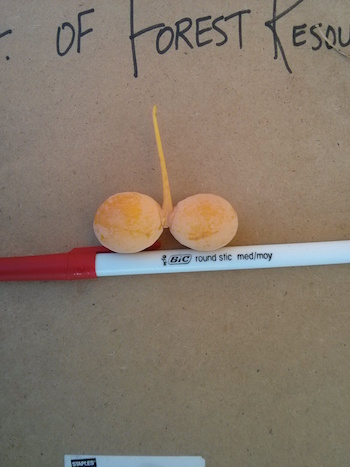 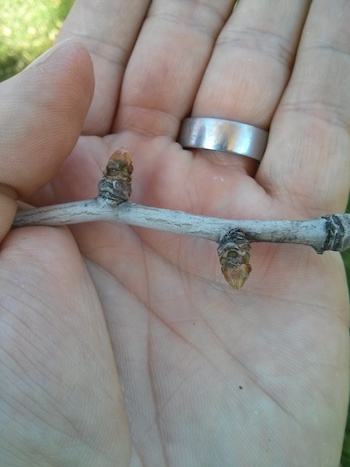 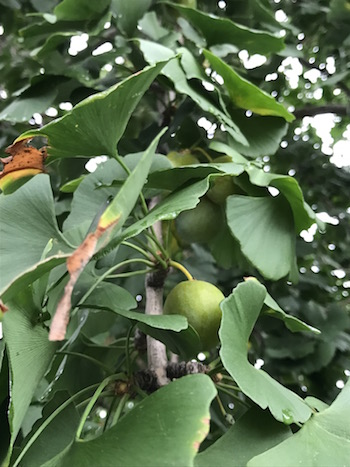 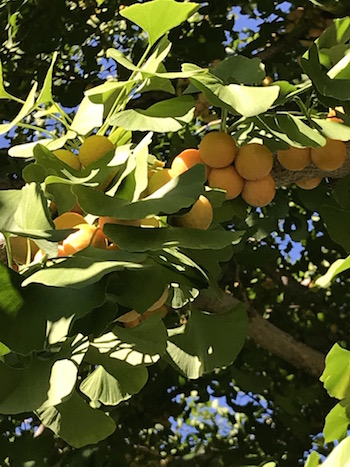 Ginkgo biloba is a magnificent species of shade tree from Asia. It is the sole extant species in the genus Ginkgo, and is in a distinct evolutionary group from conifers, like pines and firs, and flowering plants, such as birches and maples. Leaves are fan shaped with outward pointing veins. The leaves can sometimes be split into two main lobes, hence the species name biloba, or two lobes. The leaves turn bright yellow for excellent fall color, and are a deep green in the spring and summer.  Ginkgos are dioecious, meaning trees are either male or female. Male trees produce small pollen cones, while female trees produce seeds contained in a fleshy, fruit like layer. These ‘fruits’ contain butanoic acid and smell rancid when they fall to the ground.  Some describe the smell as similar to rotten butter or vomit. 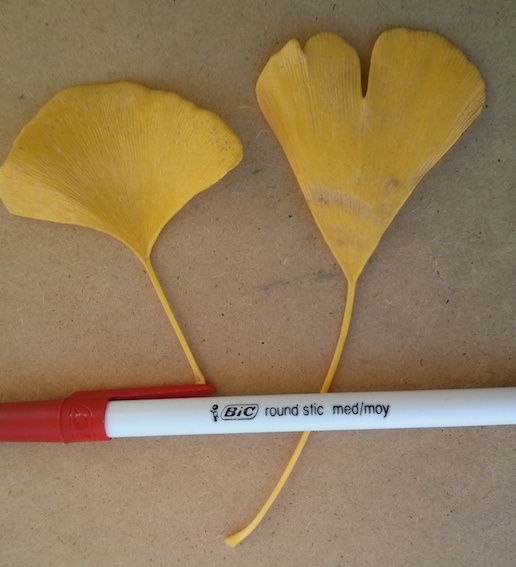 Extracts from ginkgo leaves are occasionally used medicinally, and the ‘fruits’ can be cooked and eaten. The nut-like seed within the ‘fruit’ is sometimes used as a traditional wedding food in parts of China, but the fleshy outer layer can be toxic to children and can cause dermatitis when handled.

Ginkgo biloba and other Ginkgo species were once widespread throughout the world, but the native range is now limited to a small area in Eastern China. Some scholars believe that there are in fact no native stands of G. biloba remaining, and that all current stands were established and preserved by humans. Ginkgos were first introduced into the United States in the 1700s, and have since become popular shade trees. They do well as street trees because they are highly adaptable and drought-tolerant, and many cities plant male trees to avoid the stink of the seeds. However, ginkgos, like several other plant species, can spontaneously change sexes, so male trees can become seed-bearing female trees.

Ginkgo trees are known for their resistance to most pests and insects. 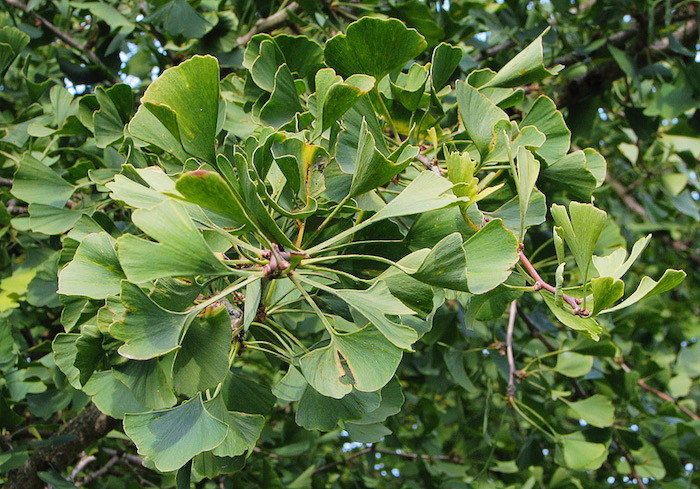 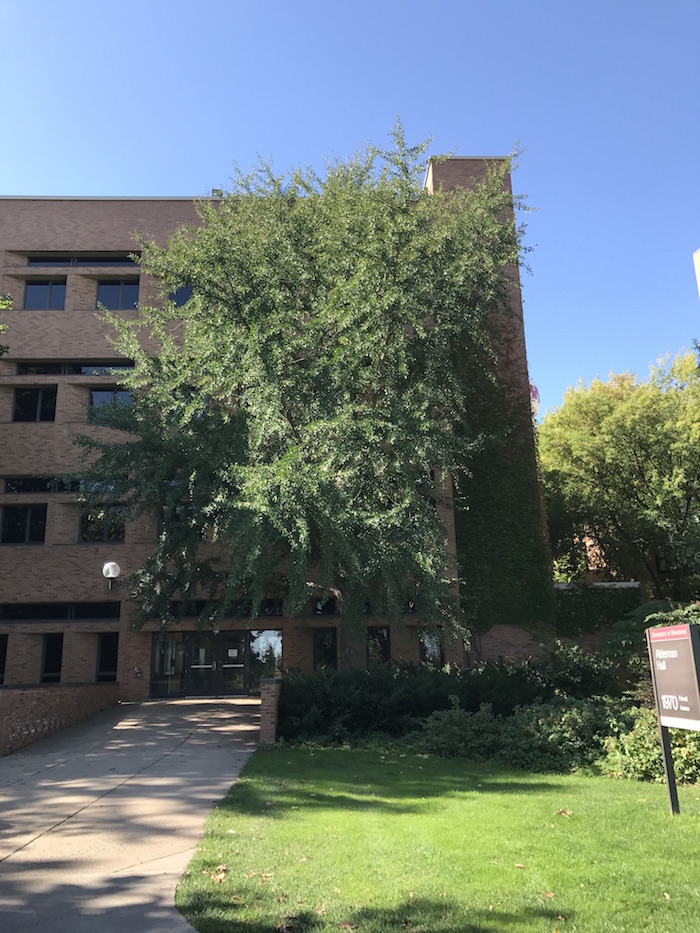 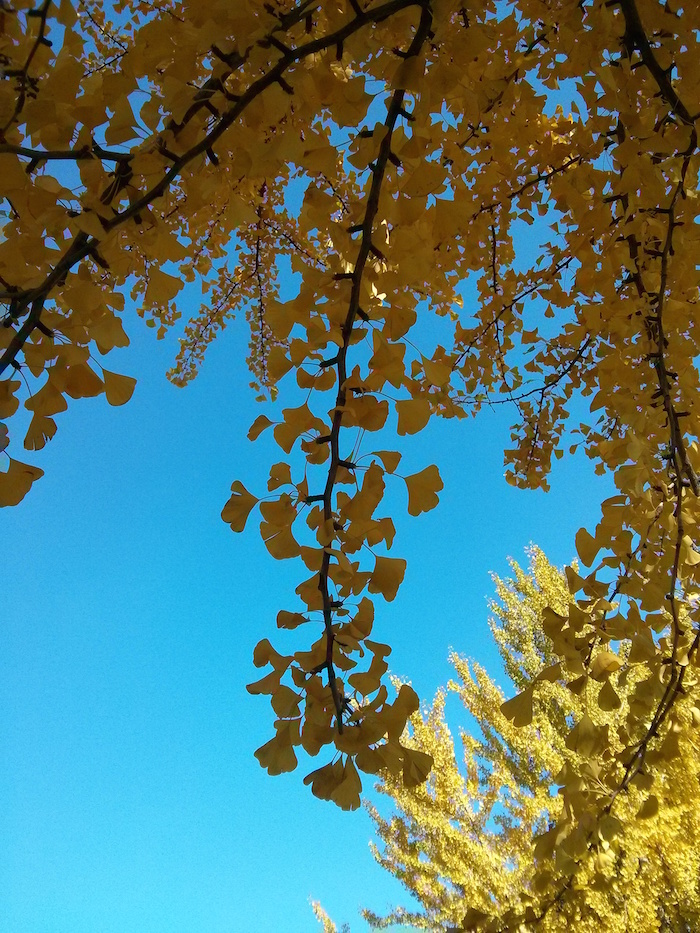